Let’s talk about something important: How to build REAL strength.

First off, there’s no such thing as fake strength as far as I’m concerned. What I’m getting at by the term “real strength” is all-around strength – strength that can be applied NOT to one exercise or one type of resistance (kettlebells, barbells, bodyweight, etc.) but rather, strength that can manifest itself in every type of effort.

In order to build this kind of strength you need two things:

Essentially, multi-angle strength is the ability to be strong at any angle. Why does this matter?

There’s an old training axiom that says “You need to become generally strong before you can become specifically strong.” This means that the stronger you are at a variety of things, the easier it is to build strength at one specific thing. 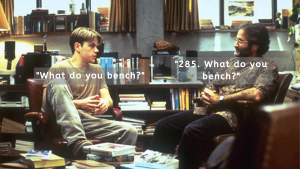 Let’s take the bench press for example, EVERYONE’s favorite move. You’ll see a lot of people learn this lift and continue to do it until they hit frustrating, years-long plateaus that they just cannot break free from. I know it all too well. This is something known as pattern fatigue, where your body gets too much practice in just one movement pattern (or style of exercise) that your progress begins to go backwards.

In 2009 when I met Coach Petty, he insisted upon a strong overhead (military) press. I spent three months on a program that Petty referred to as the Russian Bear Program (not for beginners) – nothing but hundreds upon hundreds of murderous repetitions in the double kettlebell clean and press. He also suggested dabbling in upper level calisthenic exercises like olympic ring dips and one-arm/one-leg push ups…on your knuckles. Petty was one of a kind.

In that time I built insane strength where there was none before. After 6 months of not touching the bench, I hit my previous PR for 5 easy repetitions followed by 4 more sets of 5.

Bottom line: You don’t have to wait until your shoulders and knees hate you in order to make some changes. I wouldn’t recommend it. Matter of fact, taking 6 months off your favorite exercise is not necessary in most cases. You can rapidly move a lot things forward by alternating your training sessions to include those “supplementary” exercises that get you moving at different angles.

Say you’d like to take the numbers upward on the bench (horizontal push) – you can add the military press in once or twice per week and see huge improvements in bench press even if you’re not practicing it as much.

One of my favorite approaches is “ABA – BAB” On “A” days you’ll do bench press and on “B” days you’ll do military press. Your weekly training would look something like this:

Continue this routine for a good two months so you can judge things honestly while dialing up the sets, reps, and intensities as necessary. Include other movements like pull ups, squats, deadlifts, and kettlebell swing variations as well, of course.

Previous Post: « How To Build Abs
Next Post: Fasting & Keto For Fat Loss – 3 Things You Should Know »

What Clients are Saying

Amazing At What He Does!

Rob is a dedicated trainer and is amazing at what he does!  With the busy lifestyle I have, I need someone who offers a level of accountability. Rob offers just that in a friendly, encouraging manner which I truly appreciate. His knowledge and his ability to convey what he knows have made my workouts enjoyable